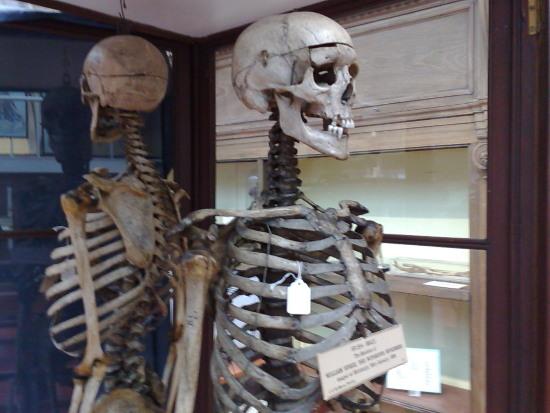 The twenty-eighth of January is a date very well-known to all my ghosts: it's the date when, in 1829, the notorious "Body Snatcher" (or more accurately, multiple murderer) William Burke made his appointment with the hangman's noose at Edinburgh's Mercat Cross, on The Royal Mile. The execution is said to have been attended by a crowd numbering in the thousands, with the cheer that arose at the fateful moment being clearly audible three miles away in the port of Leith.

The day's spectacle didn't end there for Burke, either: after the hanging, his corpse was inducted to the university's medical school, where an additional clause of his sentence was to be carried out. There, like the poor victims he had sold to anatomist Dr. Robert Knox, Burke was dissected, so that in death he might make some contribution to society's benefit. That contribution is in fact ongoing, as his skeleton dwells there to this day, although its role is perhaps now more that of a conversation-piece than a teaching aid. (I do wish they could secure his display-case a little better at night, though: the blundering bag of bones has developed a nasty habit of showing up during my walking tours and making a spectacle of himself!)

Another relic of Burke is, however, a little closer to home. During the dissection (which seems to have descended into a bit of a free-for-all), sections of his skin were flayed off. One such piece, from the back of his left hand, was spirited away and tanned, like leather, to form the exterior of a calling-card holder. This grisly artefact was purchased by Cadies & Witchery Tours director Robin Mitchell at auction in 1988, and after various public outings (including on the tours themselves for a brief, ill-advised period), in 1997 it was loaned to the Police Information Centre's museum on the High Street for display just a stone's throw from where Burke met his end.

In 2014 the museum closed its doors, so we decided to take on the task of exhibiting the card-case ourselves. It now resides in a custom-built display case on the counter of our shop in West Bow, where it has come to be known as The William Burke Museum: possibly the smallest museum in Edinburgh!

To mark the 188th anniversary of Burke's execution, we have created a page dedicated to this small but perfectly-formed exhibit, including a round-up of related articles and our growing collection of associated merchandise. You can view it here.