Home » Horrid History » The Rise and Fall of Burke & Hare

The Rise and Fall of Burke & Hare 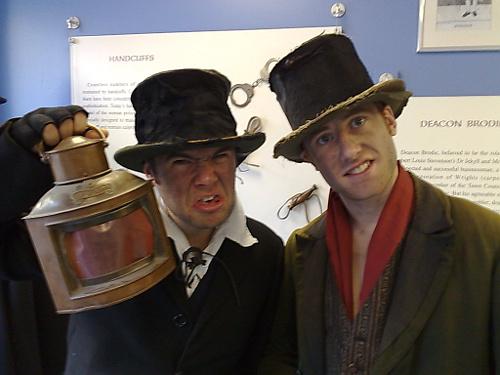 In the early 1800s, Edinburgh's intellectuals faced a dilemma. The enlightened doctors of the Medical School required a regular supply of human cadavers on which to conduct their research. Their students also needed bodies to study in order to learn anatomy.

Unfortunately, the Law only allowed the bodies of executed criminals to be used for medical research, and a Judge would usually only add this to a criminal's sentence for particularly heinous crimes. Demand for fresh cadavers soon outstripped the number that even the harsh legal establishment of the time could supply.

Desperate to find a new avenue of supply, the doctors and their students turned to Edinburgh's considerable criminal element who, in exchange for sizeable sums of money, went out and acquired newly deceased bodies by stealing them from their graves. These men became known as "body-snatchers" or "resurrectionists".

Although history would make them infamous as body-snatchers, William Burke and William Hare were never proven to have robbed a single grave. They came to Edinburgh in the 1820s, having left their native Ireland separately seeking work, and met in the City shortly after Hare and his wife had opened a lodging house in the West Port, near the Grassmarket. Despite their dislike for one another, William Burke moved into William Hare's house with his partner Helen McDougal, and the two men began working on schemes to make quick, easy money.

In 1827, the two fell upon an ingenious means of making profit. One of Hare's lodgers, an elderly man named Donald, died in his room, still owing Hare 4 pounds in rent. Furious, Hare devised a plan for getting his due from the old man's corpse. At his funeral, he and Burke stole the body from its coffin and replaced it with a sack of bark. They took it that night to the offices of Professor Robert Knox, a renowned anatomist, and were paid 7 pounds and 8 shillings for their work.

Realising that they could grow rich easily if they could keep up a supply of bodies, Burke and Hare hatched a plan. They couldn't expect their guests to drop dead of natural causes very often, so they graduated from theft to murder. Luring unsuspecting victims back to Hare's lodging house, they would ply them with whiskey until they lost consciousness. One of the men would then restrain the victim, while the other held their mouth and nose closed. By killing in this manner, Burke and Hare supplied the anatomists with possibly up to 30 unmarked, undamaged bodies for their experiments. The doctors' "no questions asked" policy kept scrutiny off them, as long as they picked only unknowns.

However, it wasn't long before they got careless. Several of their later victims were well-known faces in the Edinburgh community. Mary Paterson and Mary Haldane were both notorious prostitutes. Mary Haldane's daughter, who came looking for her after her disappearance, also ended up on Professor Knox's slab. Most suspicious of all was a street entertainer, James Wilson (also known as "Daft Jamie"), whose deformed foot made his identity obvious to the students who witnessed his dissection. Despite enquiries from his own class, Knox denied that the body was Wilson's.
Burke and Hare's final victim was Mary Docherty, an Irishwoman who Burke had befriended by pretending to be a relative. Her remains were discovered by two of Hare's other tenants, made suspicious by Burke and Hare's attitude and local rumours, and the police were summoned.

On the 31st of October 1828 Burke and Hare were arrested, along with Helen McDougal, and all three were questioned separately. Burke blamed Hare for the killings, claiming to have known nothing about them, but it was Hare that the police eventually offered immunity to, in return for his testimony against the others. Hare agreed, never having cared for Burke or McDougal. The two were charged with the murder of Mary Docherty, and Burke was charged separately with the murders of Mary Paterson and James Wilson.

The trial began on Christmas Eve 1828. Both of the Hares testified against Burke and McDougal, and several other witnesses told how they had seen the victims in the company of one or the other just prior to their disappearance. On Christmas morning, after just 50 minutes of deliberation, the jury returned its verdict. Burke was found guilty on all counts and sentenced to hang. The case against McDougal was found "Not Proven" (a unique quirk of Scots law which still exists to this day), and she was freed.

In the month between the verdict and his execution on January 28th 1829, Burke made two thorough confessions to 16 murders committed by himself and Hare, though the dates didn't match up, and Burke had earlier accused his partner of killing more without his involvement.  At his execution, over 25,000 people were present to see him drop through the trapdoor, and legend has it that the cheer could be heard as far away as the port of Leith. His remains were given over to the Medical School, where he met the same fate as his victims, dissected in the name of science, his bones kept preserved in a glass case as a curiosity in the School's Museum.

Although Hare and McDougal were freed and banished from Edinburgh, their infamy followed them wherever they went. McDougal is thought to have fled as far as Australia, mobbed wherever she went until she died in 1868. Hare, according to legend, suffered even worse, and ended his days as a blind beggar on the streets of London, having been thrown in a lime pit by an angry crowd.

As the Edinburgh Evening Observer noted on the eve of their trial: "No trial in the memory of any man now living has excited so deep, universal and appalling an interest." The fascination with this crime has endured now for over 178 years, and shows no signs of dwindling. Perhaps even Burke and Hare themselves knew that, even if they died, the horror of their crimes had ensured their immortality.