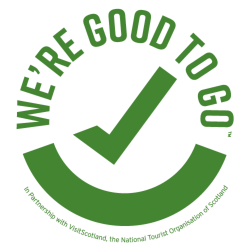 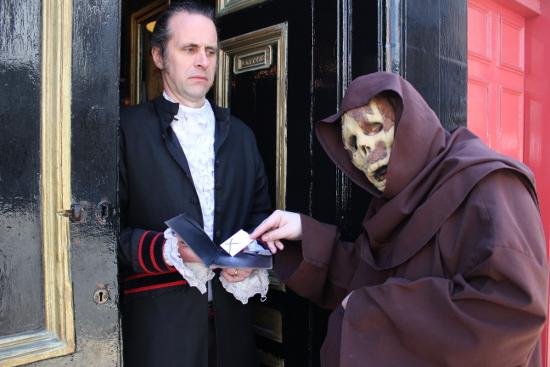 Being the proud custodians of a calling-card case fashioned from the skin of the notorious murderer William Burke, we receive many intrigued enquiries from visitors. Such as: What precisely is a calling-card? How it is different from a modern business card? And why, precisely, would one think it a good idea to carry them around in such a gruesome device as that? Well, dear reader, we can answer most of these questions...

From the late 18th Century onwards, the growth of the middle and upper-middle classes, particularly in modern urban environments such as Edinburgh's New Town, generated new issues with regard to the vitally important matters of Protocol and Etiquette. Particularly, how was one to go about introducing oneself into polite society? (And, perhaps more importantly, how was polite society to go about ensuring that the proper people were admitted to it, and the less-desirable equally politely excluded?)

This conundrum lead to the rise in popularity of the calling-card (or visiting card), along with an appropriately complex set of rules as to how they should be presented, received and, where necessary, returned. The rules varied depending on the age, gender and marital status of both the visitor and intended recipient, as well as their prior relationship. Naturally, these procedures relied heavily on the presence of servants, since persons without those would not be worth considering anyway.

For a single gentleman hoping to make a new acquaintence in town, for example, the procedure would be as follows: the visitor would arrive at the front door of the house and await attention from a servant. They would then present their card to the servant (turning down the upper-right-hand corner of the card to indicate that it was presented in person), and would then typically depart to await a response. The card would then be placed upon a silver tray and presented to the householder, who would decide whether to accept a visit (in which case they would send their own card to the enquirer) or to decline (in which case the card would be returned). One would not typically await an immediate response, even if the person one were calling on was at home, and especially not if it were a first visit. This, it should be noted, is the least complicated procedure.

A lady making a similar visit would be expected to wait in her carriage while her groom delivered her card to the household, along with at least one of her husband's cards (ideally two: one for the lady of the house and one for her to pass on to her husband). Single gentlemen would also be expected to deliver multiple copies of their card if there were more than one lady in the household. A lady's card ought also to bear the names of any adult, unwed daughters in their household who might accompany their mother on any visit. Adult sons would of course fall under the category of single gentlemen and would thus have their own cards. Children were not expected to be brought unless specifically invited, and unmarried women did not make visits without being escorted (and thus had no need for visiting cards: they would have to wait for neighbours to present cards to them).

If the visitor were lucky enough to recieve a calling card in exchange (either in person or by the hand of a servant), it would typically have the days on which the household would be "at home" engraved on it. Times at which one would call were strictly separated: "Morning" or informal calls were to occur between noon and 3pm; formal or ceremonial calls between 3pm and 4pm, semi-formal between 4pm and 5pm, and intimate calls between 5pm and 6pm. It was expected that the caller would know which category they fit into, and that they would depart immediately if another call should be accepted during their visit, which ought not to last longer than 20 minutes. Under no circumstances would a call regarding business be entertained at a private residence.

The card itself had to meet a number of standards: a lady's card was the largest (around the size of a postcard), since it had to carry the most information. A married man's would be about half that size, and a bachelor's would be the smallest (around the size of a modern business card). The reasoning behind this was that the lady would not be carrying her own card (having no pockets in which to do so), whereas a gentleman would have to carry his in his breast pocket, ideally in some form of case so as to prevent it from being soiled. The card ought to have engraved upon it the visitor's name and sometimes (but not always) their address. Professional titles (such as Dr. or M.D), military ranks (above NCO) or hereditary titles were appropriate, but honorary ones (such as Prof. or Esq.) were not. Bachelors were also not entitled to preface their names with "Mr", as that was reserved for married men.

It might seem that such a personal item would be a fine opportunity for customisation and self-expression -- and in Europe it was indeed fashionable to use cards with illustrations or even photographs printed on them -- but this was generally frowned upon in Britain (until the Victorian era, when collecting albums of such cards became a popular hobby). It was acceptable to have an elaborate border to one's cards, but they were usually kept as plain and austere as possible. A blank space was usually left under the name in which notes or, more commonly, one of a number of standard initial messages could be written. These initials denoted French words such as P.F. (pour féliciter) in the case of a card presented as a token of congratulation, or P.C. (pour condoléance) in the case of one presented to a household in mourning. The turning down of one corner or another also conveyed meaning, indicating that the card was presented by the person named upon it or by a friend of theirs, or suggesting that the visitor was about to depart on a long trip and might not be available for some time.

The case in which they were carried, on the other hand, was entirely open to free expression of fancy. Since it would never usually be seen by any person of quality (being taken out only in order to hand its contents to a servant), there was no reason why the case should not display any image the bearer wished, nor why it should not be, as with ours, a rather macabre memento mori.

These complicated systems of etiquette were considered crucial in maintaining the proper order of society in a time when it was becoming increasingly difficult to determine a person's standing by reputation. Wealth generated by international trade and later industry began rapidly to level the field between the middle and upper classes, and yet it was still considered of vital importance that one associate only with the proper sort of people, particularly since this was generally the only means by which good marriages could be arranged. The ability to keep up with these systems was, therefore, of paramount importance in demonstrating proper breeding; and failure to do so invited summary ostracism from polite society from which it was almost impossible to recover, regardless of wealth or any other qualities.

It may seem strange to us in our modern, laissez-faire society that people ever troubled themselves with such complicated and time-consuming modes of behaviour, but it is worth considering that they themselves saw nothing in the least unnatural or inordinate about it: to them it was perfectly obvious that one's behaviour should mark one's place and prospects within society. We today think little about why there should be a proper format for a CV, or of the complexities of accepting or declining a Facebook invite: in all times and in all places there is ettiquette; the unspoken yet critical rules which dictate proper behaviour, rarely considered or remarked upon but always judged by our peers.

So it is, perhaps, worth considering what there is about our contemporary behaviour that future generations will come to think of as equally stuffy and needless, and why precisely we stick with it.