Home » On Tour » Junk in the trunk: the Bum Tree

Junk in the trunk: the Bum Tree 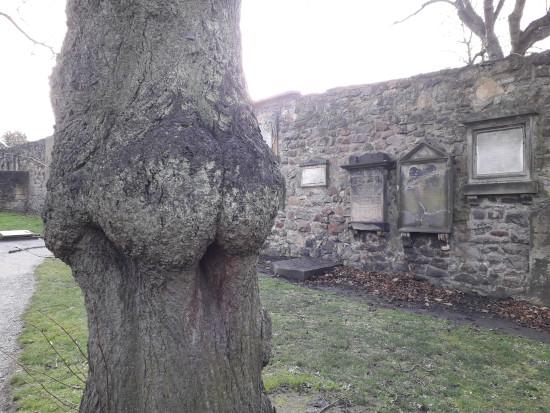 While conducting our afternoon walking tours around Greyfriars Cemetery, we have noticed an intriguing new local ritual unfolding before our very eyes. According to a certain Tour Guide (who will remain nameless), it is good luck to "slap the bum tree". A number of tour groups are now pausing at this tree, situated near the Flodden Wall, whereupon the Tour Guide encourages guests to slap the tree three times for good luck. This may sound completely nutty; however, perhaps we do not need to look far beyond the gates of the Kirkyard for clues as to the inspiration of this new custom.

Take the blackened bronze life-size statue of Greyfriars Bobby at the top of Candlemaker Row, for example. Many tourists are rubbing the plucky Skye terrier's nose for good luck. This tradition was started about fifteen years ago by persons unknown ... possibly another local tour guide? Since then, most visitors are passionately partaking in this persistent polishing of the passive pooch's proboscis. The dog's statue, mounted on a granite fountain, had quite happily existed since 1873 without a shiny snout. Changed days.

Then, only a stone's throw away in the Royal Mile, visitors are rubbing the protruding big toe of the philosopher David Hume's 1995 statue. It has been suggested that rubbing the toe gives students a hefty table-spoonful of good fortune before undertaking their exams. There's a smidgen of irony here, as Hume himself opposed any type of superstition! Again, the originator of this tradition is lost to history. Perhaps a philosophy student?

An earlier example to luck-seekers would be the Heart of Midlothian, a heart-shaped mosaic in the cobblestones outside St. Giles' Cathedral. This stone marks the entrance to the old Tolbooth Prison which was located at this spot until 1817. For much longer than the statue-related examples above, it's been considered good luck to spit on the stone; although, to be fair, it's not always so lucky on a windy night. In modern times it's become a common assumption that this particular custom originates among Hibernian FC fans.

We initially thought rubbing statues was a pastime peculiar to Edinburgh's Old Town, until we found a page on Wikipedia devoted to the art of Statue Rubbing. We didn't realise it was an international obsession, from rubbing the testicles of the Charging Bull statue in New York to the rubbing the breasts of the Molly Malone statue in Dublin, to give two mischievous examples.

So, what is distinct about the bum tree? Well, it's a tree and not a statue; and we KNOW the person who started this tradition. However, for the time being we are sworn to secrecy. Perhaps, if or when the bum tree custom becomes a bigger phenomenon, we might be pressured into releasing the Tour Guide's name (yes, it is a Tour Guide) but until then, our cheeks are sealed.

If you wish to inspect the Bum Tree in its first blush of newfound fame, book one of our Greyfriars Cemetery walking tours.

In the meantime, happy slapping and don't get splinters.