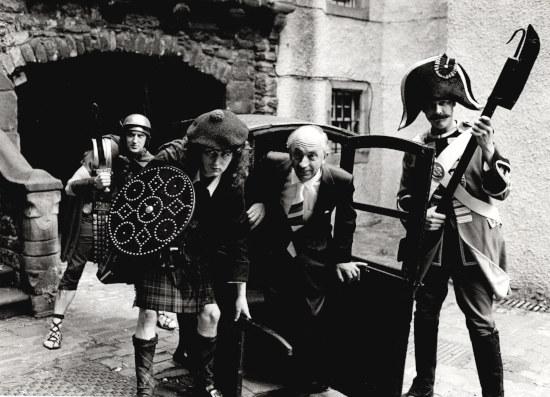 We launched the Ghosts & Gore Tour in 1987 with support from the Scottish Tourist Board (today known as VisitScotland). In fact the Chairman of the Scottish Tourist Board at the time, Alan Devereux, took part in the media event to launch the new tour which involved a Roman Soldier, a Wild Highlander, a member of the Edinburgh City Guard and the aforementioned Mr Devereux stepping out of a sedan chair. The event took place at Bakehouse Close in Edinburgh's Canongate, an area better known to visitors as the Museum of Edinburgh (formally Huntly House Museum) and also as a filming location for the TV series Outlander. This was a very successful launch with TV, radio and the newspapers of the day covering the event.

But why a Roman Soldier, a Wild Highlander and a member of the Edinburgh City Guard? Well, from day one we wanted our walking tours to include costumed historical characters appearing en route, expanding on our earlier Murder & Mystery Tour success which introduced the concept of "Jumper-Ooters" to the world in 1985.

A Roman Soldier was introduced into the tour as it was little known to visitors and many locals at the time the Romans had arrived in Scotland in the 70s CE and had built the Antonine Wall between the river Forth in the east and the river Clyde in the west (the narrowest part of Great Britain). As well as admiring the stunningly visual Roman costume, many tour groups found the history of the Romans in Scotland quite fascinating.

The Wild Highlander, another great costumed character, represented one of Bonnie Prince Charlie's Jacobites arriving in Edinburgh on 17th September 1745 (prior to the Battle of Prestonpans) and again represented another fascinating time in Scotland's long bloody history.

The member of the Edinburgh City Guard, named Nicol Hook, was a character we chose as an authority figure to lead the walking tours. Although a very visual character with his scarlet tunic and twin white sashes forming a St Andrew's cross, it was in hindsight a very impractical costume as it included a large hat, false moustache and a six-foot Lochaber Axe! Thankfully the more viable Victorian gent, Mr Alexander Clapperton (deceased), took over from Mr Nicol Hook in the 1990s. Our ghostly Roman soldier also retired, in the early 1990s, presumably back to Rome as he found Scotland too cold, to be replaced by ... well, you'll need to attend our Ghosts and Gore Tour to find out.

Although the costumed characters appearing en route on the 2022 version of the Witchery Ghosts & Gore Tour may be slightly different from the original cast of 1987, the 21st Century version of our Ghosts & Gore Tour still embraces the recipe of history, humour and the occasional "Jumper-Ooter".

Category:
Around This Time