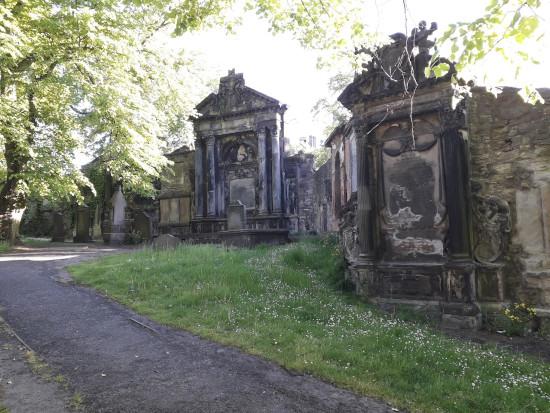 The summer of 2020 was a surreal experience for all of us.

It was a double-edged sword for tourist guides as tourism ground to a halt. The upside, however, was an eerily quiet capital city to explore; including Greyfriars cemetery, which was a joy to wander through as the kirkyard was as silent as its long-term occupants.

The summer gave us time to rediscover the joys of Greyfriars, which was always a place we visited when time allowed. Suddenly, time allowed a great deal, and we sank deeper into the environs than ever before. With the customary heavy visitor traffic largely curtailed, there was ample space to take in the unique atmosphere of the kirkyard and more time to conduct further historical research, which is something we enjoy immensely.

We discovered fascinating life stories associated with of some of the lesser-known people buried in the cemetery; though when we say "lesser-known" we do so with the greatest respect, as in our view their notoriety should be greater. These are fascinating characters who have either been inexplicably overlooked, or overshadowed by better-known contemporaries. We found scientists, mathematicians, lawyers, surgeons, inventors, actors, poets and writers who have excelled in their field (and that's before you mention a certain youthful mage).

As our historical research built up (and up), we decided we should plan a new walking tour of Greyfriars cemetery looking at some of the lesser known characters: including the lecturer who taught Charles Darwin, an actor buried in full theatrical costume and a First World War ace pilot. In fact, one of our discoveries was picked up by the Edinburgh Evening News when we stumbled upon the secretary of the first ever Edinburgh Music Festival which took place in 1815. His name was George Farqhuar Graham and he is listed on the foot of a gravestone which has almost worn away.

Having now taken hundreds of photographs in Greyfriars and having enjoyed the incredible detail revealed on the tombs within these photos, we decided that it was imperative we conducted the trip during daylight hours to ensure visitors enjoyed Greyfriars Cemetery in all its glory.

For this new tour we have also departed from our signature motif of "jumper-ooters" (costumed ghosts surprising the guests at regular intervals). Not only did we feel such antics might be a little on-the-nose for so sombre a setting (a sentiment we imagine the Kirk elders would share); quite frankly the wealth of material we've unearthed proves so plentiful and remarkable that there's no room for distractions!

Our Greyfriars Cemetery Tour is aimed at families, couples or smaller private groups. Public bookings are now available at 2:00pm on Thursdays, Saturdays and Sundays; private bookings can also be made by appointment. The duration of the tour is 90 minutes, commencing at our wee shop.