Home » On This Day » Years of April foolishness 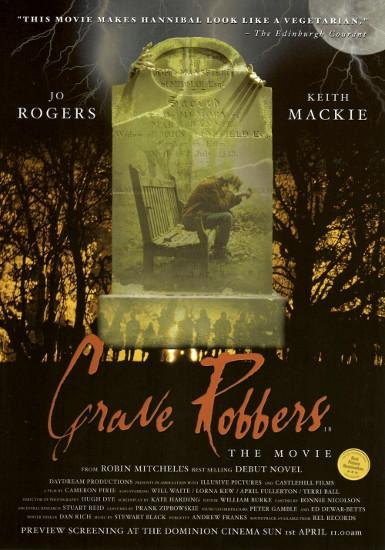 Over the years we have created and implemented quite a few April Fool spoofs in and around Edinburgh.

In 1999, we worked with Scottish Television on an April Fool about Brazilian footballer Ronaldo. The challenge was to convince the public Ronaldo had Scottish ancestry and was eligible to play football for Scotland. The idea was conceived by Stuart Reid of Scottish Roots, who enlisted the help of our very own Robin Mitchell, and Tony Higgins from the Scottish Professional Footballers' Association.

Not every wheeze was successful: our attempt to dupe a Scottish newspaper into believing there was a Sasquatch loose in the countryside of Midlothian failed at the last hurdle when the deputy editor said: "That's just a bloke in a gorilla suit!"

However, probably the most elaborate April Fool we undertaken to date was in 2001 when, in association with Edinburgh's Dominion Cinema, we arranged the exclusive world première of a new film called Grave Robbers: The Movie. The secret was: the film didn't exist!

Posters were pinned up around the city advertising a preview screening of this fictitious movie at the Dominion on Sunday 1st April at 11am. Local radio lent a helping hand by publicising the event, and free tickets were issued to interested parties in advance.

In the true traditions of an April fool prank, the movie poster was littered with clues. The stars listed included "April Fullerton". The editor was listed as William Burke (Scotland's notorious 19th Century bodysnatcher) and the film was made by a fictional company called Daydream Productions. If that wasn't enough, the poster referred to a best picture nomination at the Paisley International Film Festival and bore a reviewer's quote that: "This movie makes Hannibal look like a vegetarian" (from a newspaper that had been defunct for over a century). Perhaps people don't read posters?

Miles Fielder, the film critic of the movie and music magazine The List, printed a copy of the Grave Robbers: The Movie poster and details of the screening and promised a review of the film in the following edition. Then Grant Stott, of the Scottish radio station Forth FM advertised our event on his show. He said that people should just turn up to the première as tickets were free ... and Ewan MacGregor was going to be there!

Early that chilly morning, fifty people turned out to queue for the eagerly-anticipated screening. The crowd was eventually led into the cinema, introduced to the "up and coming" stars of the new movie (aka some of our off-duty ghosts) before being shown a short film prior to the (fictitious) feature. It was at this point that the audience was informed that the event was actually an elaborate April fool.

Ewan MacGregor lent a helping hand. Perhaps we could have been clearer, however, that it wasn't that Ewan McGregor, but an enthusiastic almost-namesake. (What's one more letter between friends?) In appreciation of the crowd taking part in the event (and to avoid being lynched), everyone received a copy of Robin Mitchell's Grave Robbers novel prior to the screening of the short film Sean Connery's Edinburgh.

On Monday 2nd April, the Daily Mail, Scotsman and Daily Mirror carried the story and Danny Chalmers of Forth FM broadcast the report.

And what about this year? Well, we'll tell you once you tie your shoelace.