Home » On Tour » What is a jumper-ooter? 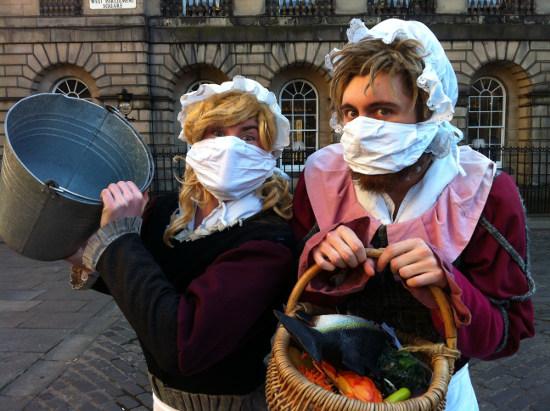 The term jumper-ooter (or jooter, for short) was  invented by our co-founders Robin Mitchell and Colin Macphail on a warm summer's night in June 1984. In those ancient pre-jooter mullet-haired days of auld, Robin and Colin, resplendent in the full Highland garb, conducted personal walking tours of Edinburgh's Royal Mile.

Then on one fated day, Robin and Colin met the owner of The Witchery Restaurant (James Thomson), who suggested conducting a more sinisterly-themed walk highlighting the darker side of the old city (with his very much in-keeping eaterie as a jumping-off point), and thus The Witchery Murder & Mystery Tour was born. Initially this walking tour was just for guests dining in the restaurant, but that was soon to change.

One evening, a larger group requested a walking tour, and Robin and Colin felt they should provide something more than just historical stories, so Colin found an old coat and a ghostly mask and 'jumped out' during Robin's guided trip, much to the delight of  everyone attending and so the term (and job title) 'jumper-ooter' was born.

To be fair though, the term originally used was 'jumper-outer' (a ghostly figure jumping out of doorways) but this name only lasted 24 hours before Robin and Colin added a Scottish twist to this title.

Since those Halcyon days of the early 1980s, a grand total of 91 enthusiastic souls have undertaken the role of 'jumper-ooter' on our evening walking tours appearing as a variety of characters including a bad-tempered (accused) Witch, a Mad Monk, a Skeleton, a Beggar and a Wild Highlander.

So after more than thirty years guiding visitors and locals around Edinburgh, we still employ 'jumper-ooters' (in slightly better costumes) on our ghoulish tours and it's nice to hear the term used elsewhere - knowing where it all began.