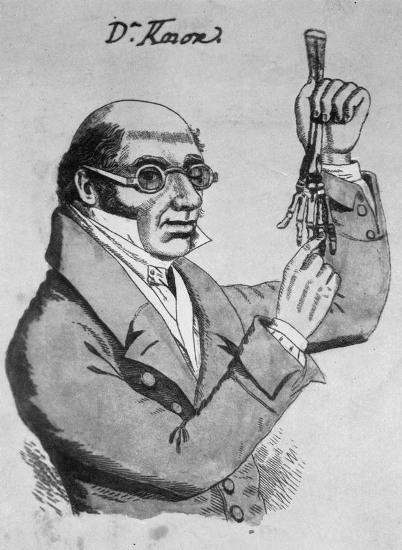 12th February 1829 - Just over two weeks after the execution of William Burke for the notorious West Port murders, a crowd gathers on Calton Hill. Bearing an effigy of Dr Robert Knox, they march to his house in Newington and there, after hanging their effigy from a tree in view of his window and setting it alight, stage a riot.

Although Dr Knox is a key figure in the story of the West Port murders, he is often overlooked in the telling of the story. He was never questioned in court about the matter, nor charged with having any part in the crime by the authorities. The public, on the other hand, held him to be almost as culpable as William Burke had been and, indeed, as his partner Hare.

Hare had escaped the noose by giving evidence against Burke and had by this time been released and vanished. Whether he was later beaten to death or blinded as the various rumours claimed, the conclusion of the affair was deeply unsatisfactory to the people of Edinburgh, who saw it as proof of their long-standing suspicion of Edinburgh's surgeons.

That left Dr Knox, as the only remaining participant in the murders, as the sole object of the mob's wrath. However, debate lingers over Dr Knox's true level of involvement, and whether he was really any worse than anyone else in Edinburgh's medical establishment.

Knox had begun work in Edinburgh almost exactly 6 years earlier in 1823, having returned from service as an army surgeon during the Napoleonic war convinced that the key to success in surgery was a thorough education in anatomy. Within a year he had convinced the Royal College of Surgeons to open a comparative anatomy museum (of which he was appointed Conservator), and by 1826 he had taken over Barclay's anatomy school in Surgeon's Square, where he provided extramural tuition for hundreds of students.

This role was absolutely essential since the lecturers at Edinburgh University's medical school were, by all accounts, absolutely terrible. The practice of allowing the council to give professorships at the University as gifts had led to some positions becoming practically hereditary, as evidenced by the three-generation tenancy of the Professorship of Anatomy by the Munro family: the last of whom, Alexander Munro Tertius (the third), occupied it in Knox's time.

Munro was considered by his students (including Charles Darwin, who was entirely driven away from studying medicine by him), to be a truly abysmal teacher, his lectures regularly dissolving into melées from sheer boredom. His students were forced, if they wanted an education of any worth, to look for it outside of the University walls.

Fortunately for them, private anatomy schools were flourishing in Edinburgh. There were several located in Surgeon's Square, but by far the most popular was Barclay's, and that in no small part thanks to Dr Knox.

Knox was an enthusiastic and flamboyant lecturer who believed wholeheartedly in the importance of his subject matter. Such was his popularity that he would conduct two lectures (complete with dissections) almost daily throughout the University year, and speak to a packed theatre every time.

Naturally, the demand for his classes meant that Knox required a considerable supply of subject matter. Officially, the only route of supply to the anatomists was via the hangman: "anatomisation" was a common post-mortem sentence for those condemned to hang for murder. However, despite there being over 200 other crimes on the books which carried a mandatory death sentence there were relatively few executions actually carried out; the majority of death sentences were commuted to transportation to the colonies. Even when execution was ordered, the additional penalty of anatomisation was usually reserved for particularly heinous crimes, and the majority of those executed were turned over to the University itself, and not the extra-mural schools.

There being no strictly legal recourse for the private schools proved no object, however, since the laws at the time provided loopholes so large that they might as well not have existed. For example, while it was technically illegal for a surgeon to buy a corpse, it was not illegal for them to own any number of "specimens". Thus, once a cadaver was actually in a surgeon's establishment, it was legally a specimen, and there was no requirement for the surgeon to explain how he had come by it.

Further, while it might be illegal to buy a corpse, it was perfectly legal to sell one. Anyone possessed of an inconvenient corpse which they could not afford to bury could legally sell that corpse to an anatomist of their choosing. Officially, the payment would be to cover the burial costs once the remains were returned.

Unofficially, the remains were frequently neither returned nor buried, and it was rare that those who sold them ever asked for them back. From the point of view of most anatomists at the time, this somewhat amoral practice was an absolutely necessary evil, which at worst only harmed the dignity of those already dead.

It is often suggested that Dr Knox must have known that the bodies being supplied to him by Burke and Hare must have died by violence and, while that may be true, it was also probably true of the vast majority of his subjects. At the time, corpses were not kept as evidence in criminal trials or after accidents. They were seen by the police surgeon as soon as possible after death, and then quickly turned over to the family for burial.

Or, at least, to whomever could convince the mortuary attendant that they were the family. There were in fact several organised gangs in Edinburgh wholly engaged in retrieving bodies by fraud in this manner, and it was by this route that the anatomists received the bulk of their subjects. Grave-robbing is actually a misnomer in most cases, since waiting until after a corpse is buried is a hugely time-consuming and inefficient way of going about stealing it. It was considerably more dangerous too, since if you took anything other than the corpse from the grave (a ring on its finger, or even the clothes it was buried in), you could be hanged for Grand Larceny (you also had to leave the coffin).

Stealing the corpse itself was not, in fact, a serious crime. Thus the organised bodysnatchers could hear of a man being killed in a fight on the Cowgate in the evening, have claimed his body by midnight and have sold it to an anatomist before morning, all without anyone risking anything worse than paying a relatively trivial fine. And thus the victim of a murder could be the subject of an anatomy lecture within a day of his death without anyone asking any questions. The system was commonly-known, practised fairly openly, and even used by the University.

It was, in fact, Dr Munro at the University to whom Burke and Hare intended to sell their first victim, and had they not been directed instead to Dr Knox's offices by one of his students (who it should be noted did not think anything unusual of the matter), things might have ended differently. It is unlikely, however, that Munro would have behaved any differently, since neither he nor Knox dealt with such deliveries directly. An assistant handled the exchange and, in most cases, put the corpse aside in storage.

This is quite an important point: Burke and Hare's victims constituted only a fraction of the hundreds of subjects Knox dissected over the course of his career as a lecturer, and very few of them were dissected immediately after they were received. One of their more famous victims, Mary Paterson, was kept preserved in whiskey for 3 months prior to being brought out for dissection. She was not ultimately subjected that that indignity: she was instead recognised by Dr Robert Liston, the famous surgeon, when Knox proudly displayed his forthcoming attraction to him. Liston punched Knox unconscious and took Paterson's body to be properly buried, not because he suspected foul play of any sort, but because having been acquainted with Mary through his charitable work in the town's slums, he could not countenance the thought of her body being defiled by the Doctor and his students.

Even so, there were occasions on which Knox's suspicions should have been aroused. When Daft Jamie, a well-known local "entertainer" was delivered to his offices, there can be no real question that Knox knew who he was. Certainly his students recognised Jamie immediately, and strongly voiced their concerns. Knox claimed it was not the same man, but quickly moved to work on making the subject's most recognisable features less so. His behaviour suggests that, even if he did not know that his subjects were victims of murder for profit, he suspected they had met unnatural ends.

The Edinburgh mob, when it gathered outside his home, were convinced that he had knowingly purchased the bodies of murder victims from their killers, if indeed he had not commissioned the killings. They unleashed their anger on his house, breaking windows and threatening to drag Knox himself out onto the street, but were eventually driven off by the Town Guard.

In response to this, and to the generally threatening behaviour of the populace (which had led him to leave his house only when armed with pistols), Knox submitted himself to a board of enquiry. The board ultimately cleared him of all wrongdoing, which was not as certain an outcome as might be thought, since by now the majority of Edinburgh's medical establishment thoroughly hated Dr Knox. Although loved by his students, he had always been considered arrogant by his peers and, by openly criticising the work and teaching of other lecturers (particularly Alexander Munro), had made many life-long enemies.

Regardless, even now, having been so closely involved with so great a scandal, which had inadvertently brought the entire school under suspicion, his peers could not say that he had done anything wrong, largely because they were carrying on the same practices themselves.

He had, however, worn out his welcome with the medical establishment. Although they could not actively drive him out, he was shortly afterwards made to resign from his position at the surgeon's hall museum. When the University made its own anatomy classes compulsory, and withdrew their approval of the private schools, Knox's classes emptied.

Knox eventually moved to London but, unable to find a position in any surgery, he instead worked as a journalist until he found a place as a pathologist, at which he worked until his death in 1862.

Knox's role in and responsibility for the West Port murders will doubtless be debated for as long as the affair is remembered. His work and teaching undoubtedly helped advance the study of medicine, and the surgeons he helped train saved countless lives. In the end, though, the means proved impossible to justify.