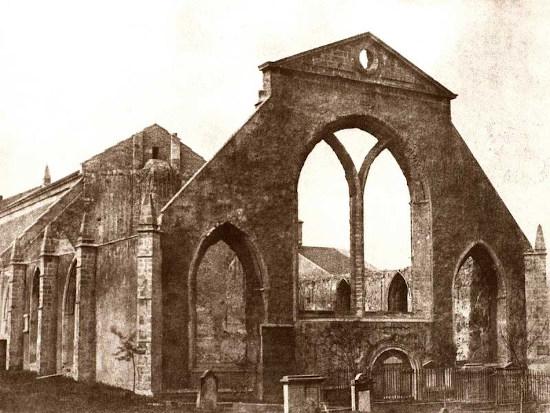 17th May 1718: On this date Edinburgh's Greyfriars Kirk was accidentally blown up by gunpowder. Not quite the Gunpowder Plot of 1605 on London's House of Lords but instead just a simple accident.

Compared to the above rhyme I reckon a poem commencing with the words "Remember, remember the 17th May..." has limited prospects of literary success, although I'm happy to be proved wrong by our readers. Answers on a postcard!

In 1845 tragedy struck Greyfriars again: apparently a boiler overheated, and a mighty blaze gutted the historic kirk. Some of the windows in the church still show markings of this fire today. And while we're talking about windows, as part of the rebuilding project, stained glass windows were installed: the first in any Scottish parish church since the Reformation.

Thankfully Edinburgh's great fire of 1824 missed Greyfriars. The fire started on the 15th November 1824, and lasted for five days with around 400 homes in the Royal Mile being destroyed. Apparently, Sir Walter Scott watched the blaze from the crown spire of St. Giles. Call me old fashioned but maybe Wally should have climbed down from this lofty height, grabbed a bucket of water, and helped to put the fire out.

Greyfriars takes its name from the Franciscan friars who wore grey. Back then we also had Dominicans who wore black (as in Blackfriars Street) and in more recent years Deep Fat Friars (as in your local chippie) who wear a greasy pinny.

All this talk of fire and friars is making me hungry, so let me conclude with the following artistic licence comment. Today Greyfriars Kirkyard has many visitors looking for names on gravestones associated with Harry Potter including Riddle, Cruikshank, Scrymgeour, Moodie and Cornelius (sounds like a five a side team). Let me add my own spurious connection to the Potter mania associated with Greyfriars Kirkyard... Harry Potter and the Goblet of Fire.