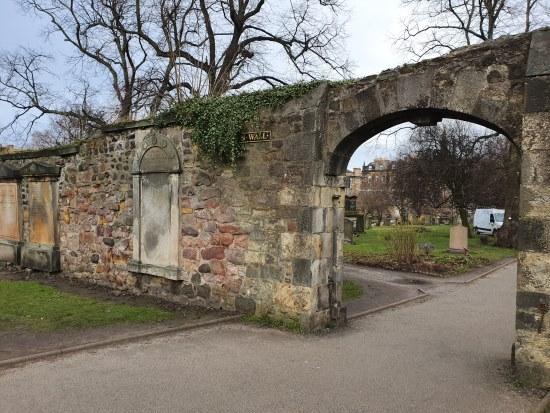 "Extent for walling of the toun.

The president baillies counsall and communite hes grantit and consentit that ane extent be gatherit of the haill communitie extending to the sowme of V li., with the dettis awand to the toun for the furnesing and defens of the samyn, efter the forme and effect of our Souerane Lordis writingis direct for that intent."

On this date the Burgh council issued this proclamation commanding a tax on each person resident in the town in order to raise the funds for a new city wall, the amount owed to vary according to their holdings (land and property) within what were to become the new town limits, with an upper limit of five Scots Pounds per contributor.

The new wall was being built as a direct consequence of the defeat and near-total destruction of the Scottish army, along with King James IV and a significant portion of the Scots nobility, on Flodden Field in September of the preceding year. However, as well as defending the town against possible invasion by the English, it was also intended to help prevent the smuggling of untaxed goods into the marketplaces which had developed outside the previously established boundaries of Edinburgh proper.

Once it was completed, the Flodden Wall was over a metre thick, over 7 metres high and encompassed just over half a square kilometre: the area today known as the Old Town. Six fortified ports permitted access to the town, their locations today identifiable only by the names of the streets where they once stood. Within its perimeter lived 10,000 people, a population which swelled to over 40,000 by the middle of the next century.

Although the tax was dutifully paid by the majority of Edinburgh's residents and work began at the West End of the Grassmarket that same year, the wall was not in fact completed until 46 years later in 1560, which technically makes the council's habit of missed deadlines and inflated budgets a legitimate tradition.