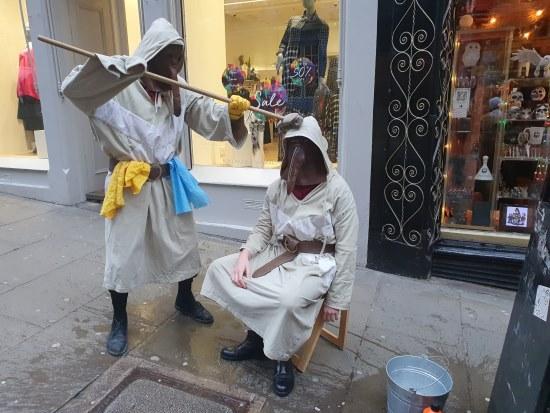 19th January 1586 - Yet another outbreak of the dreaded Plague drew to an end in Edinburgh around this time, and on this date the Burgh Council "Ordanis Alexander Fraynche, fowle clenger, to be clengeit and ane vther conducet in his rowme als guid cheip as can be."

That is to say: "Ordains Alexander French, foule clenger, to be cleansed [of the Plague] and another [should be] appointed in his place as cheaply as possible."

Alexander French had come to Edinburgh from his home in Fife in May of 1585, having been summoned by the Burgh Council, along with his colleague John Speir, to become the town's foule clengers.

At that time there had only been a handful of cases in and around Edinburgh, but the Council knew from long experience that only careful advance planning could prevent disaster. As it transpired, the outbreak which struck later that year and lasted throughout the winter was a severe one, costing hundreds of lives, and the clengers were sorely needed.

The role of a foule clenger is often misunderstood, with varying definitions being given depending on where and when they were working. A common interpretation of the title is "Plague Doctor", but neither French nor Speir had any medical expertise (not that contemporary medicine had any power against the Plague), nor was it their appointed task to cure the afflicted. Besides which, the surgeon James Henryson had already been placed in charge of the hospitals for all medical purposes.

Rather, "foule clenger" literally means "one who cleans those infected with the Plague", but it is also distinguished from the less commonly known term of "clene clenger" (several of whom were also commissioned around this time). The most important distinction between the two being that the "clene" would handle the cleaning of persons coming to the town who were not known or suspected to be carrying the Plague; while the "foule" would deal directly with those who were infected and would, as a consequence, be treated as though they were themselves infected.

In modern terms, French and Speir were high-risk decontamination specialists, and their job was to thoroughly clean and more importantly isolate anyone suspected of carrying infection into the town. Their cleaning techniques involved using smoke, hot water, and soap.

Although these techniques might at first may seem rather primitive, the Council was apparently desperately in need of them. As the epidemic reached its peak, they sent out representatives to meet French, now hard at work in the camp set up to isolate the infected on the Boroughmuir, to promise him that if he kept up his high standard of work he would be "honestly rewairdet with a howse mailfrie [rent-free] and a pensioun for his lyfetyme."

Such a generous reward for apparently simple service may seem remarkable (although not so much given the risks involved), but rather more remarkable was the fact that French and Speir's techniques apparently worked. Although hundreds did die during the 1585-6 outbreak, the majority of those who contracted the Plague and were taken into the custody of the foule clengers survived, including Dr. Henryson, and Alexander French himself. French, whose work kept him in constant contact with the infected, unsurprisingly fell ill sometime around the end of November 1585, but lived, likely thanks to his own understanding of the disease.

Even though the cleaning obviously could not cure the Plague, it may have achieved something of almost equal importance. The Bubonic Plague is so-named for the immense pus-filled buboes which it causes to form on the sufferer's body. These would often burst dramatically, and that could be the turning point of the disease. The buboes form during the early stages of the Plague, where it attacks the lungs and lymphatic system, and is easily spread by coughing. The bursting of the buboes could allow infected pus to contaminate the blood, leading to the near-absolutely deadly septicaemic Plague.

By simply keeping the bodies of the infected clean, and washing out the wounds left by the buboes after they burst (or lancing and cleaning them at once early on), French and Speir were apparently able to keep the disease from taking on its more deadly form.

By December of 1585, the number of infected had fallen far enough that they were all able to be housed in a single building (known as the White House) which the Council had leased. Finally, on this day in 1586, Alexander French himself, one of the last remaining occupants of the White House, was pronounced in the entry above to be free of infection. His brush with the Plague apparently convinced him to retire from the position of foule clenger, presumably taking up his free house and lifetime pension with no small satisfaction.

I say "presumably" since there is no specific mention of French receiving his due: however, the fact that his successor was to be hired at a rate "as guid cheip as can be" gives one the sense that not only were the Council as good as their word, they perhaps felt a little overcharged.