Home » On This Day » On This Day... 24 November 1783: robbery on the road while furloughed; guilty stowed in corpses' abode, friend gallowed due to Code

On This Day... 24 November 1783: robbery on the road while furloughed; guilty stowed in corpses' abode, friend gallowed due to Code 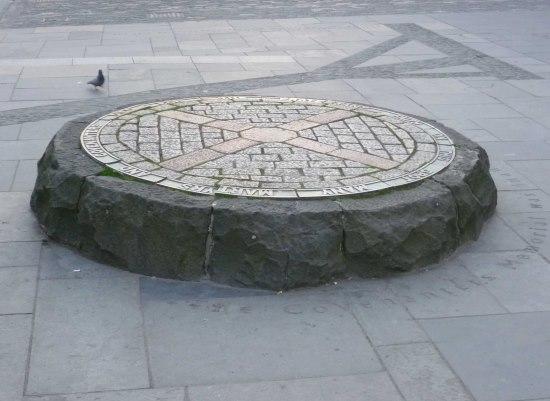 24th November 1783 - On this date, the Edinburgh Advertiser carried the following announcement:

"Escaped from the Tolbooth of Edinburgh: James Hay, indicted for highway robbery, aged about 18 years, 5 feet 10 inches high, slender made, pale complexion, long visage, brown hair cut short, pitted a little in the face with the small-pox, speaks slow with a haar in his tone, and has a mole on one of his cheeks. The magistrates offer a reward of twenty guineas to any person who will apprehend and secure the said James Hay, to be paid by the City Chamberlain, on the said James Hay being re-committed to the Tolbooth of this city."

The month beforehand Hay, along with James Andrews and James Paterson, had been a soldier in the 61st foot regiment, then stationed at Edinburgh Castle. On leave for the day, the three friends had spent the afternoon at a tavern on the far side of the Meadows (the swathe of parkland beyond the city's southern edge). At about 7pm they were returning (heavily intoxicated) across the Meadow Walk when Hay, walking ahead of the others, accosted, argued with and then pushed to the ground a gentleman by the name of Dykes.

Andrews pulled Hay away from the scuffle, leaving Dykes, angry but otherwise unharmed, to go in the other direction. Shortly thereafter, Hay revealed that during the fight he had stolen Dykes's pocket-watch. Hay asked Andrews to take charge of the watch and Andrews, fatefully, agreed.

The next morning Andrews awoke, with almost no memory of the preceding night's events. He discovered the pocket watch, but could not recall how he had come by it. With tragically naïve honesty, he presented the watch to his commanding officer in the hope that it could be returned to its rightful owner. The three Jameses were, as a result, immediately arrested for theft.

These men had the misfortune to be charged with theft during the period when the notorious "Bloody Code" held sway over the legal system. At the time of their arrest, there were over 200 offences which carried a mandatory death sentence in Scotland, the vast majority of them defending property. Consequently, the theft of goods worth any more than 12 pence from a shop was considered to be Grand Larceny, and could see the offender sentenced to hang. If a theft had occurred on a road outside of city limits, it would be considered Highway Robbery (a crime even more rigorously prosecuted owing to the difficulties in catching such thieves in the act). Even taking possession of property known to be stolen, for any reason whatsoever, carried the death sentence.

The contemporary thinking behind this was that such a high penalty for such meagre crimes would create a great deterrent: as the Marquis of Halifax put it, "Men are not hanged for stealing horses, but that horses may not be stolen". However, it also meant that when stealing a horse from someone, one might just as well kill that person to eliminate a witness and risk no greater penalty.

As a (perhaps unexpected) result of this severity, juries at the time became extremely hesitant to find people guilty of capital crimes. They would often deliberately underestimate the value of stolen property to keep it below the amount required to hang the thief (a Scottish jury once valued a £10 Bank of England note stolen in a burglary at £4, to keep the crime from being Capital). Even the courts themselves were often willing to bend the rules and acquit on technicalities, or commute a death sentence to transportation wherever possible. This was for the simple reason that if they had indeed hanged everyone who drew a death sentence, executions would become an almost daily spectacle in the city. Even at the time, such a prospect was contemplated with horror.

Unfortunately for Andrews, he was not to benefit by such mercy. After he, Hay and Paterson gave their account, the three were imprisoned in the Tolbooth gaol to await trial. Hay, sensing that things were not likely to go his way (but believing that since he had committed the actual crime the other two would not suffer in his absence), made an escape, slipping out of the Tolbooth while his relatives distracted the guards. He fled to the nearby Greyfriars Kirkyard where the students of Heriot's School (of which he was an alumnus) supplied him with food and kept him hidden until he could be smuggled out of the town. Despite the considerable reward offered for his capture, no one revealed his location to the authorities.

This left only Andrews and Paterson to face trial. Paterson, having taken no part in either the theft or its aftermath, was persuaded to give evidence against his friend who, by the 22nd of December, was left alone in the dock.

Andrews admitted that he had been present during the Highway Robbery , and that he had afterwards taken possession of the stolen watch. The jury considered therefore that they had no choice but to find that he was guilty as charged, but recommended unanimously that the court show him mercy.

Tragically, the jury had badly misunderstood their both their powers and the obligations which the law placed on the judge. Believing that they were present only to determine whether the facts of the case were proved, they were ignorant of the fact that, under Scots law, they were also empowered to decide whether the crime itself was worth prosecuting. They could, had they known, have found Andrews Not Guilty on the grounds that no crime had been intended by him.

However, having found him guilty, they had inadvertently left the judge with no alternatives. Under the law, Andrews was sentenced to death. Several attempts were made to appeal to higher powers, with the jury repeatedly sending out letters to both the Secretaries of State and the King himself attempting to explain the error, but confusion over whether some members of the jury had revised their opinions (they had not) and apparent complete disinterest in the case from London meant that no answer was ever received. It seems likely that, following Hay's escape, Andrews had to be made an example of.

Andrews went to the Grassmarket gallows a completely innocent man, known to be such to all who witnessed and participated in his execution. Ironically, the guilty party, James Hay, was at that moment concealed in a tomb in Greyfriars Kirkyard, less than 100 metres from where his friend was dying. He was apparently desperate to turn himself in by this stage, in the hope that Andrews might be spared. He was persuaded by his friends that all his surrender would achieve would be to add another pointless death to the whole sorry affair.

Although Andrews was the last man to hang in the Grassmarket, the Bloody Code remained in force for another 30 years, when the Judgement of Death Act 1823 would make capital punishment mandatory only in cases of murder and treason (though it remained at the judge's discretion to apply it for any other crime). The remainder of Edinburgh's public hangings would take place on the Lawnmarket, where the practice continued for a further 80 years.