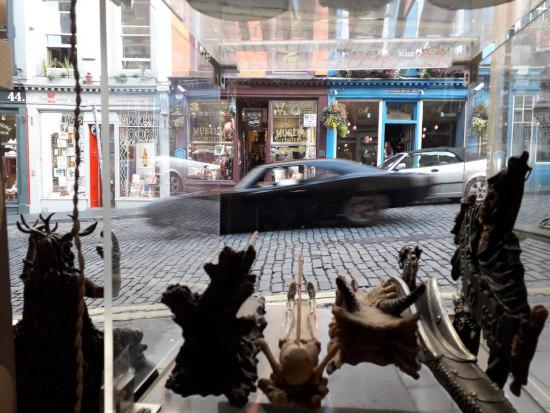 It's not every day we look out of our shop window and see a souped-up muscle car careering down the street the wrong way, with a musclebound shaven-headed career criminal at the wheel. Every weekend, certainly, but rarely at about noon on a Wednesday.

On this occasion, the automotive action was not the spirited hi-jinks of the local youth, but our fellow dream-weavers from Hollywood, shooting scenes for the upcoming ninth installment of the cinematic juggernaut that is the Fast And The Furious franchise.

If you've been living under a rock for the last 18 years or so, the "F&F" saga follows the exploits of gym-bothering car enthusiast and serial grand-larcenist Dominic Toretto (Vin Diesel), his merry band of co-accused, and the luckless but equally tight-t-shirted law enforcement representatives, mobsters, spies and parking attendants whose job it is to try to ruin their fun, fail, and reappear as allies in the next film. (If you've been living under The Rock, he joined the cast in 2011 so perhaps you'll recall a particularly lively party upstairs around that time.)

One of the hallmarks of the series is its wholesale wrecking of nice expensive vehicles, so the choice of Victoria Street as a location should come as no surprise to locals, who know the sound of a chassis glancing off the Giant's Causeway-like heap of cobbles it calls a roadway only too well.

Plot intricacies of FF9 (the film's working title) remain under wraps, but we'll cautiously wager that Dom's gotten himself into another scrape with the law and/or international superterrorists, as Vin (or his stunt-double) barrelled down the street well above the posted speed-limit in flagrant opposition to the one-way system. Had the film crew not taken the precaution of cordoning-off the bottom end of the street, he'd have found three selfie-takers and a Deliveroo rider plastered across his bonnet by the time he passed the Bow Well.

Fortunately, there was no collateral damage, unlike when that bunch of rowdy superheroes trashed our favourite kebab shop (and Waverley station) a couple of years back. Nor did the visual spectacle leave us questioning our slender grasp on sanity, like when Bollywood came to town.

We wish the production every success, and may they keep that fast, furious and fabulous flag flying for alliteration in artworks, through inevitable incremental installments!