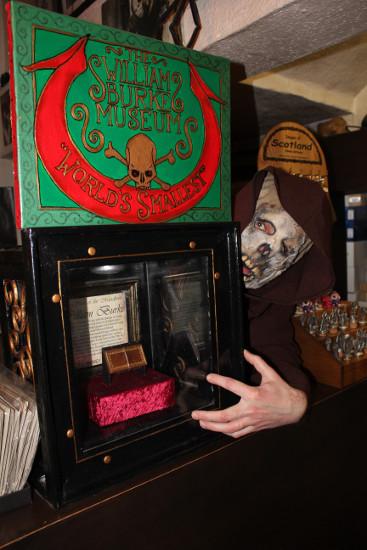 Has it been a year already? Yes, this weekend our small but perfectly-formed exhibit of awfulness celebrates its frightfully festive first anniversary.

The William Burke Museum, which displays only ONE exhibit, a calling card case made out of the skin of notorious Edinburgh "bodysnatcher" William Burke, celebrates its first birthday on 28th January 2018, exactly 189 years after the execution of William Burke which took place on the 28th January 1829.

Burke and Hare committed a number of murders in Edinburgh in 1828, and then sold the corpses to Dr. Robert Knox at the Edinburgh Medical School for use in his dissection classes. After his public execution in January 1829, Burke was publicly dissected (like his victims) and grisly souvenirs were made from skin taken from various parts of his body.

The calling card case, made from skin taken from the back of William Burke's left hand, was sold at auction for £1050 in 1988, to Robin Mitchell of The Cadies & Witchery Tours, by the family of Piercy Hughes, a descendent of one of the surgeons involved in the dissection. "We used to carry the calling card case around on our walking tours, but decided that we needed to protect it from wear and tear and loaned it to the Police Information Centre in Edinburgh's Royal Mile", said Robin Mitchell. "When the Police Information Centre closed we needed to come up with another plan of action for this grisly relic and The William Burke Museum concept was hatched." 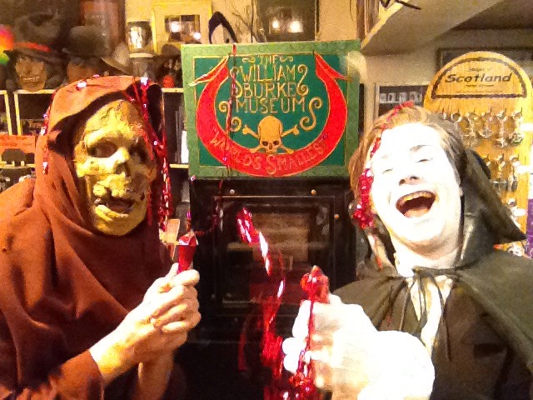 The Mad Monk and Adam Lyal (deceased) join the celebrations.

Cameron Pirie, manager of The Cadies & Witchery Tours said: "In the first year we've welcomed over 15 000 visitors from all over the world. The visitors love the idea of our shop housing the smallest museum in the world. I know there are museums in England and the USA claiming to be the smallest but we're the only museum with ONE exhibit."

In 1997, the calling card case was sent to London to feature in the Wellcome Trust's exhibition Dr Death - Medicine at the End of Life. It also featured on Channel 4's Four Rooms and the BBC's Antiques Roadshow where it was described as "priceless".

The William Burke Museum is open at The Cadies & Witchery Tours shop, 84 West Bow (Victoria Street), Edinburgh. The museum is open 7 days a week, 11am-8pm and entrance is free.