Home » Shop of Horrors » A trip down Monk's Close

A trip down Monk's Close 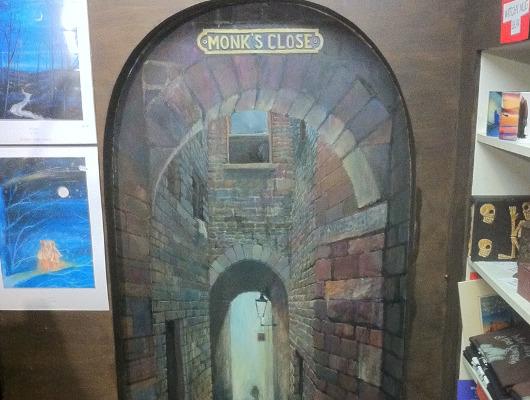 There is a unique and remarkable life-size painting in our wee Edinburgh shop which goes by the name of Monk's Close. It was painted by contemporary Scottish artist David Martin, who is not to be confused with the other Scottish artist called David Martin (born in 1737).

The present-day David Martin (born in 1975) was commissioned in 2003 to paint Monk's Close, which depicts a "close" or alleyway that only exists in our wee shop. His remit was to make our small store appear to be slightly bigger than it is by creating a painting in the classic trompe l'oeil style (literally: "trick the eye", or optical illusion), and he really delivered! Taking his inspiration from a number of closes located on the historic Royal Mile, David fused and blended aspects from all of them into what is now an entirely new and original creation: Monk's Close.

What's great about this painting is the fact that David, while studying for a Fine Art Degree at the University of Edinburgh, worked at The Witchery Tours as a 'Jumper Ooter' (Number 52 out of 91), before taking on the role of our main ghostly guide Adam Lyal (deceased) (Number 30 out of 49).

David's major breakthrough in the art world came in 2006, when he was awarded a Travel Scholarship culminating in a critically acclaimed solo exhibition at the Royal Scottish Academy in 2007; the exhibition featured a range of paintings as a result of his five-month journey throughout the Middle East and Eastern Europe. In 2015, David completed a seven metre high site-specific painting in St Andrew Square, Edinburgh in the run up to a new solo exhibition. 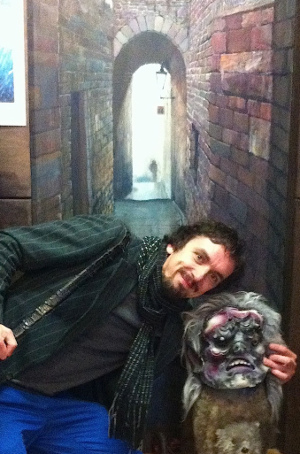 In recent times, we've had a number of visitors coming into our shop believing Monk's Close to be an inspiration for the Harry Potter franchise's Diagon Alley (it's not, and we usually admit this), although the location of our store in West Bow (the downhill stretch of Victoria Street) has reputed Harry Potter connections with many suggesting the diverse range of colourful and unusual shops located on this street sparked the creative imagination of JK Rowling for the magical setting of Diagon Alley.

So next time you're passing our (seemingly not-so-) wee shop, drop in to see the marvellous Monk's Close. And who knows, perhaps if you tap the correct bricks that feature on the design of Monks Close, you may end up in another mysterious and secret part of the Old Town, where unexplored wonders abound! (Or possibly just in our basement with a lump on your head if you knock too hard.)